Sandy Creek Park is a certified waystation for Monarch butterflies as they migrate throughout North America. This unique Durham park features milkweed, nectar sources and shelter that help sustain Monarchs throughout their migration. In celebration of the Monarchs, the Durham Monarch Festival will feature music, family friendly activities & food. Experts will be giving talks about Monarch biology, ecology, and conservation and pollinator friendly plants will be available for purchase.

I have been watching a few small patches of milkweed for monarchs. In the past week, I saw as many as 10 caterpillars feeding on the plants. Recently, the numbers have been fewer, but I have located a couple of chrysalides.

This morning, as I was tending the garden located inside this fenced enclosure, I saw a monarch caterpillar attached to the fence in the “J-Shape”. This is characteristic of a caterpillar that is ready to pupate. Butterflies do not spin cocoons; instead, a butterfly caterpillar pupates as a chrysalis. The caterpillar’s skin splits near the head (at the bottom of the “J”) and the pupa works its way out.

Although I missed some of the beginning, this video shows the process. It happens fairly quickly, especially on a warm day. Apologies for the shaky camera, I was not anticipating having something exciting to film today and didn’t have a tripod.

Once the chrysalis dries, it will resemble this one (below):

Today’s Google doodle commemorates the 41st anniversary of the discovery of the Mountain of Butterflies. The Mountain, now protected as the Monarch Butterfly Biosphere Reserve, is located 62 miles northwest of Mexico City. Each winter, millions of Monarchs make their way to colonies in this reserve.

Canadian scientists Fred and Norah Urquhart began studying the migration of monarchs in 1937. They tagged and released butterflies and recruited citizen scientists to do the same through their organization, the Insect Migration Association. This group, now known as Monarch Watch, is still actively monitoring monarch migration. The Urquharts mapped migration routes from Canada, across the United States, and into Mexico. Ken Brugger and Catalina Aguado, citizen scientists living in Mexico located the Mountain of Butterflies in 1975 after two years of searching in remote parts of Michoacán, Mexico.In 1976, the Urquharts traveled to the area and found a tagged butterfly, confirming that the monarchs really did make the long journey south.

Monarchs begin migrating south in September and arrive in Mexico starting in November. The return northward begins in March. Monarchs traveling north live 4-6 weeks, laying eggs on milkweed plants along their route. Monarchs are dependent on milkweed plants as a site to lay their eggs and as the food source for their caterpillars. It takes multiple generations to make the journey north. However, in the fall, one “super generation” of monarchs is able to travel the full southern route. The super generation butterflies enter a state called diapause during migration. They do not mate while traveling and their bodies store more lipids than the generations of butterflies making the northern trip.

Populations of monarch butterflies have decreased in the years since their overwintering sites were discovered. Urbanization, the increase of large scale farms, and the use of herbicides have reduced the habitat for caterpillars and butterflies along their travel routes. Illegal logging in Mexico has also reduced their overwintering habitat. Climate change also threatens the butterflies and their habitats. Gardeners in the US can help by planting milkweed for monarch caterpillars as well as other nectar rich flowers for adult butterflies. Ideas for attracting butterflies can be found in the Extension publication “Butterflies in your Backyard“.

The story of this discovery was published in National Geographic magazine in 1976. A documentary film called “Flight of the Butterflies” was released in 2012. This film is screened at area science museums from time to time.

Want to learn more about attracting, helping, tracking, or studying monarch butterflies?  http://www.monarchwatch.org/ has lots of information for gardeners, teachers, and anyone who would like to participate in citizen science projects to help the monarchs.

Like many gardeners, I try to plant a variety of pollinator-friendly flowering plants in my yard. Swallowtail butterflies are frequent visitors and are favorites of my family. While watching them, we noticed that there seemed to be many differences in the colors and patterns on the swallowtails in our garden, so we decided to do a little research. We found that the butterflies in the garden belonged to two species, and that we could use the patterns on their wings to not only identify the species, but to tell the males from the females. It’s not as tricky as you might think!

The Eastern Tiger Swallowtail (Papilio glaucus), is the state butterfly of North Carolina. It can be found throughout the state, and most people recognize its yellow and black tiger striped color pattern.

Male Tiger Swallowtails are yellow with four black tiger stripes on the front edge of their wings. Females are dimorphic – some are yellow and black like the males, while others are mostly black. In either case, the female Tiger Swallowtails have blue and orange spots on the hind wings. Males have little to no blue coloration. Note the male (little blue on the lower wings) between two females in the forefront of this photo:

Upon close inspection, the tiger stripes are still visible on the black form females:

Tiger Swallowtail caterpillars feed in trees. Tulip poplar, sweet bay magnolia, and wild black cherry are favorite host plants. Early instars of the caterpillars look similar to bird droppings. Because eggs, caterpillars, and chrysalis of Eastern Tiger Swallowtails are located in trees, we may not often see these stages of the life cycle.  There can be three generations of these butterflies in a year, and they can overwinter in the chrysalis stage. 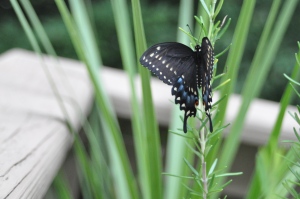 Caterpillars are green, yellow, and black. They feed on strong smelling plants, particularly those in the carrot family like dill, fennel, and Queen Anne’s Lace. This plant choice helps to protect them, because chemicals in the plants make the caterpillars less tasty to predators. There can be three generations of these swallowtails in a year.

The North Regional branch of the Durham County Library is offering a course titled “Raising Monarch and Eastern Black Swallowtail Butterflies” on September 20 from 2-4 PM. Registration is required by September 16. Per the course description, “Lori Carlson will teach you how to raise and care for caterpillars and chrysalises. Each participant will take home a critter box with a host plant and a caterpillar in order to explore the wonder of these emerging creatures.” Register Here

Have you been noticing fewer butterflies in your area? Chatham Co. Extension Agent Debbie Roos did, and she asked a butterfly expert about it. I hope you find her blog post as interesting as I do: http://growingsmallfarms.ces.ncsu.edu/2014/07/where-are-all-the-butterflies/

Invite birds, bees, & butterflies into your garden. Hear fun facts, along with how to provide their landscape needs both city and country home owners.  Shared too, are environmental practices for a safe habitat in your yards.  Taught by Master Gardeners Faye McNaull and Lynne Nelson. Class is free/ registration is required. Contact Sara Smith at 919-668-1707  or gardenseducation@duke.edu

Growing tomatoes & okra are Southern traditions. Come and learn how to grow these two staples of the Southern Garden. This seminar will also include advice on how to modify Durham’s soil for success in the garden. Taught by Master Gardener Charles Murphy. Class is free/Registration is required. 919-384-7526 ann3dgc@gmail.com