The Par Place White Oak is the 2015 Durham’s Finest Trees* winner in the ‘large category’ for its species. On March 6, 2016, four Durham trees located across the city and county were recognized for their size and significance during Durham’s Arbor Day ceremony at the Museum of Life and Science1. The White Oak is located in a private yard near Par Place and Georgia Avenue in the Watts-Hillandale residential neighborhood of Central Durham.

It has a trunk circumference of 204 inches and it is at least 100 feet in height with an average canopy spread of 100 feet. The white oak canopy dominates the over story of this small cul-de-sac and stretches over to neighboring yards. In fact, the crown spread of about 100 feet is almost as wide as the current North Carolina Champion Tree of the same species located in The Town of Pittsboro, Chatham County at 115 feet crown spread (height 112 feet, circumference 262)2.

The White Oak (Quercus alba) is a native species of the Eastern United States and the species name alba, meaning white, refers to its light ash-gray bark. Although it is shaped like a pyramid when young, the white oak develops into a substantial stout tree that is wide-spreading with a rounded crown and for this reason (and its slow growth rate) it is not currently as popular for landscaping purposes as other hardwood shade trees3. 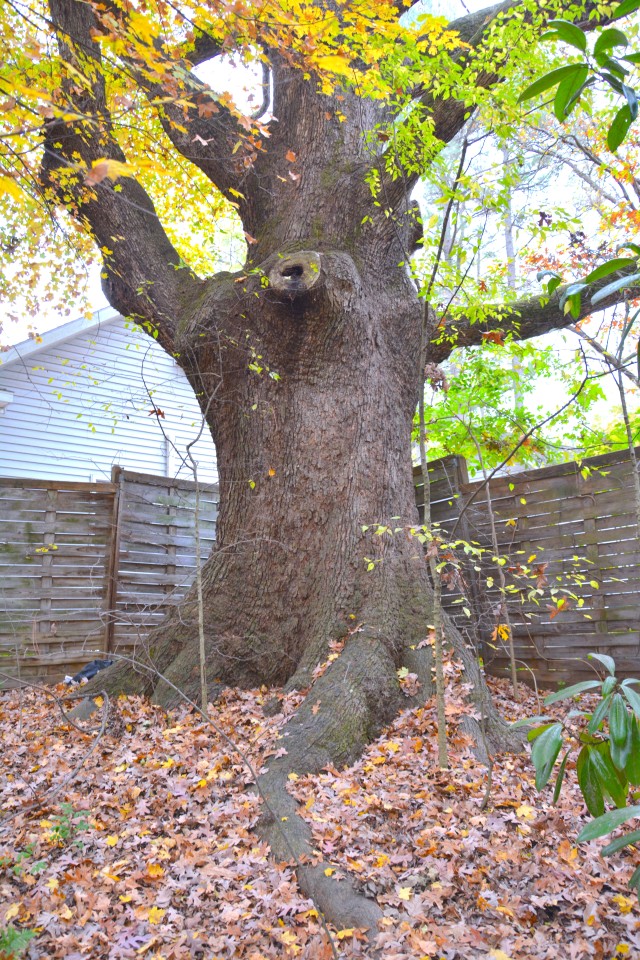 This tree is over one hundred years old and in the last century has been admired by one of Durham’s city fathers, John Sprunt Hill4. Mr. Hill owned the land in the area and was also a golf enthusiast as well as a lawyer, banker and philanthropist. He began building the Hillandale Country Club in 1909 and in 1911, donated the private golf course to The City of Durham5. (In 1960, the Hillandale Golf Course was moved to its current location further north and west.) The lot where the Par Place White Oak stands was actually the 18th Hole of the original Hillandale Country Club and the golfers used to drink from a spring also located nearby6.) Mr. Hill “so admired the huge tree that he spared it the ax and the saw.”6 when he was developing the Watts-Hospital-Hillandale neighborhood, which was driven mostly by the construction of the nearby Watts Hospital in 19107. If the Par Place White Oak wasn’t so impressive a tree back in the early 1900’s, the east-west Woodrow Street would have extended westward to Georgia Avenue and joined up with the current West Woodrow Street. Most Durhamites considered this Watts-Hospital-Hillandale area to be “in the country” until the 1930’s7. In 1956, however, Dr. Luther L. Gobbel, retired president of Greensboro College6, purchased the isolated lot on the former golf course and built a house while preserving the tree.

Please respect private property and view the Par Place White Oak from the street if you go and see this majestic, historically significant tree.

* Durham’s Finest Trees program recognizes significant trees in Durham County, promotes discovery and ability to identify trees, and helps preserve the best examples of specific tree species, particularly native and those trees well adapted to Durham County. The program also promotes awareness of trees in our community and hopes to catalog fine examples of magnificent specimens of trees due to their size, setting, historical importance, or significant feature.

Durham naturalists and tree lovers of all ages are invited to submit their nominations for significant trees in Durham County now through October 1, 2016. Trees on private or public property can be nominated in each of the three categories: largest, historical, or meritorious. Preference will be given to native North Carolina tree species. Non-native trees may be considered if they are of a species, subspecies, variety or cultivar proven to be relatively long-lived and well adapted to North Carolina. Winning trees will be recognized on Arbor Day 2017. Please read the official rules before submitting a nomination.