Seed Saving – Durham Garden Center
Saturday, October 12⋅10:00 – 11:00am
Durham Garden Center
4536 Hillsborough Rd, Durham, NC 27705
Saving Seeds from our pollinating flowers, fruits or vegetables has been a life-skill for millenia. In the 21st century, seeds are readily available from many sources but if you wish to replicate that perfect tomato or zinnia that you grew this year again next season, this class will give you all the information you need.

Sign up at the store, online or by phone
Include the seminar title and full name(s) of persons attending

As master gardeners, we learn things. But we don’t learn everything, and because we are human, we often forget what we learn or think we are so smart that we are smarter than what we learned. I find each growing season to be a lesson in humility, but also an opportunity to learn … sometimes it’s something I knew, sometimes it’s relearning what I’ve learned. Here are 10 things I’ve learned or relearned in 2018.

This winter, take time to reflect on your last year of gardening and consider what changes you can make as you begin anew in 2019. Happy New Year!

By rights, I should never have to buy lettuce. I own heat pads and grow lamps. I have both a patio and a covered porch that face south and are warm in winter. I have exposures east and north. I buy every lettuce seed packet that waves at me. By any stretch of the imagination I should have at least one pot of lettuce growing some place at any time of the year. But, my nemesis has been getting seeds to sprout.

Lettuce needs light and water to germinate. It is supposed to germinate in seven to 10 days. In my experience a generous sprinkling of seeds on top of soil-starting medium might generate two or three weak sprouts after weeks of tender care and gentle spritzing to keep the seeds moist.

Over the last several years, I’ve started all my

other seedlings in a domed enclosure that relies on sponges as growing medium. Knowing that the seeds need light to sprout, I never considered dropping the tiny lettuce seeds into the little sponge holes. But after another frustrating failure with seed-starting medium, I decided to try placing the seeds on top of the sponge plugs. And within three days, sprouts. Within five days, a forest of healthy lettuce starts. By the two-week mark, sprouts healthy enough to transplant.

At the same time, I decided to experiment with a low-tech approach. I found an old

sponge, cut it in half so it wouldn’t be too thick and sprinkled the seeds. A big advantage of sponge over plugs was that I could clearly see where the seeds were sprinkled and using the tip of a knife they could be spread out. I put the sponge in a clean plastic container from roasted take-out chicken. I poked holes in the top, wet the sponge and added water to the bottom of the container.

All seeds were grown indoors, in a temperate environment that was low-to mid seventies. I started four experiments: two high-tech (sponges and domes from a seed house) and two low-tech  (chicken take-out plastic and household sponges) at the same time.  All seeds were started under grow lights, but one of each set was placed on a heat pad. 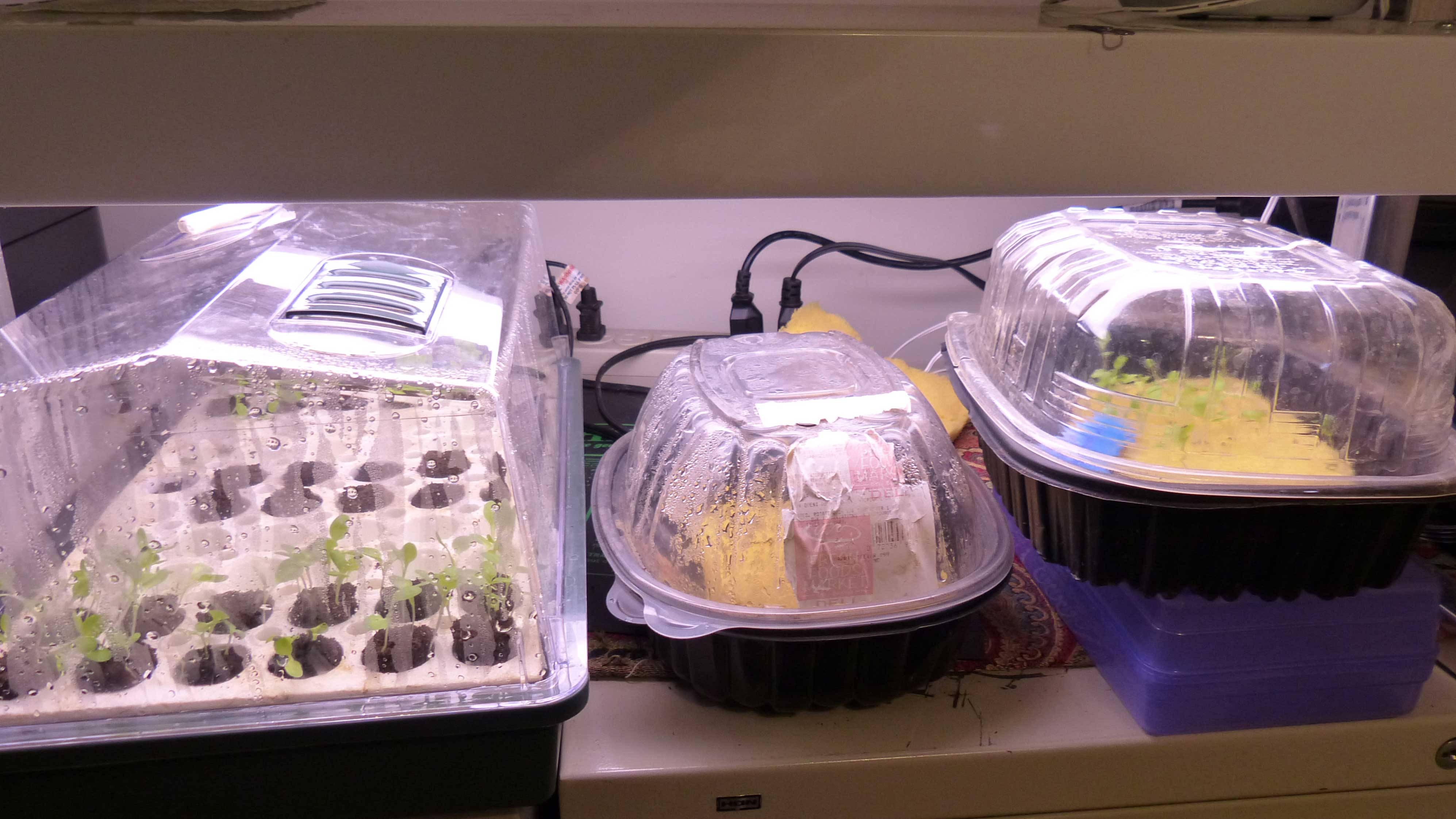 Within two days my heart sank. It looked as if the low-tech

container without heat had turned into mold. But, on closer examination, my seeds had begun to sprout. The high-tech seeds took a little longer to sprout. In both cases, those without heat did better than those with heat, especially in the low-tech plastic. Those in the high-tech sponges got their second set of leaves a day or so before the low tech and in general, looked a little stronger. After they sprouted, I watered with a highly diluted fertilizer. Fifteen days after the seeds were planted I transplanted the high-tech sprouts into cell-packs.  Getting the tender sprouts out

of the sponges was at times a little tricky. Rather than pull the seedlings I had to cut around the sponge, and I often planted part of the sponge with the seedling, being sure to bury the sponge below the soil line. In the end I had 54 plants that I put back under grow lights until they could get over transplant shock.

For this experiment I used Marvel of Four Seasons (Lactuca sativa), a butter-head lettuce described as “delicious and tender, very easy to grow.”  Once these are strong enough and I can reclaim my grow lights I am planning to try several other varieties including iceberg, which is difficult to grow in North Carolina, and Tennis, a small-head heirloom variety I couldn’t resist.

Here’s where you can find some additional information on growing lettuce: